“…Technology, to a large extent, desensitizes people, and it has the potential of rendering our industry into a commodity. If the hotel is nothing but self-check-in and kiosks and you don’t have interaction with anyone, then that type of experience can be easily copied. We all read comment cards and letters that come to us. 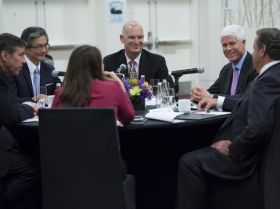 They almost never write about the product experience. It’s always about people, whether it’s a compliment or a complaint. It’s always the front desk people, how they were received, or the housekeeper. This industry is called the hospitality industry for a reason. If we, for the sake of technology and efficiency, give that up, then we’ll be like the airlines. We’ll be a commodity…”

The hotel industry is thriving once again as more Americans hit the road for business and for pleasure. But today’s travelers are ever-more demanding and tech-savvy, and they’re expecting hotels to adapt.

“…The straight-to-room idea is the big nut to crack, but this is the way the 3D customer wants to work with us now,” he said. “We can lament that we’re losing touch points with the customer, 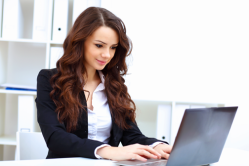 but the customer is speaking: ‘We’re into speed; we’re into convenience. We want to knock down barriers. … We don’t want to stand in line anymore.’…”

Jim Holthouser has seen plenty of change during his 35 years in the hotel business. He told 125 attendees of last week’s 16th Annual Lodging Industry Update in Memphis that even he hasn’t seen anything yet.

The speed and scope of change is more prevalent than ever, said Holthouser, Hilton Worldwide Holdings’ executive VP of global brands. Neither of those components is going to slow any time soon, he added before outlining five changes coming soon to hotels.

“You better have a pretty good idea of what’s around the corner,” he said. “The solution can take 10 years in this business. Sometimes that’s too long for the customer.”

“…A new technology, that first hit the market in 2012, has made breaking into electronically locked hotel rooms much easier and very discreet…”

“…In the end, the stigma of “the butler did it” has caused countless housekeeping staff members to be wear the label of the usual suspect, some completely without merit or proof. Many of them loose out on the finances and dignity they desperately need and deserve because of false accusations…”

In the old mystery movies it was always the butler who committed the crime. It became so cliché that even now, fifty years after the “butler” movies, people still refer to them. In the hotel industry, when a crime such as theft has been committed, it is always the maid who is blamed for the crime.

It seems logical that the only person who has access to the room besides the person paying for it would be the maid, so they must have committed the theft. But this type of logic has led to many false accusations because it appears to be much easier for guest to blame the housekeeping staff for missing items.

For more information on Petra and P3 visit petrarisksolutions.com or call 800.466.8951.

Hospitality Industry Technology Update: “What Qualities a Hotel Software System Should Have in Modern Market?”

“…Today’s hotel system, if want to raise their quality of services to attract the guests and visitors they are required to put forth the best step in

order to integrate the hotel software in place. The software helps the hotel management system to introduce the online booking and reservation which is vital in today’s time of internet…”

The competition in the modern hotel business is complex due to the extensive competition with the new players. The situation is same all across the world. Hence the hotel management seek some quality into the system which makes them better with their competitors in hospitality industry. The use of modern technology like hotel software can boost the hotel system in many ways.

“…The solution uses “Find Me” and “Follow Me” technology to enable guests to receive incoming international calls while staying at a GuestMobile equipped hotel. 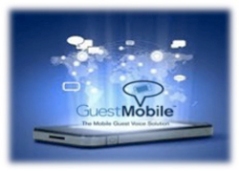 Via the hotel-branded GuestMobile solution, guests can be assigned a virtual DID phone number prior to arrival, upon reservation, or at check-in. When that number is dialed by someone looking to speak with the guest, the system routes the call either as local (Find Me) or international (Follow Me) to the guest’s own smartphone…”

This could be a game-changer for international business travelers: GuestMobile is a hospitality-specific, VoIP/Voice over Wi-Fi solution that lets guests hotel guests make and receive low- to no-cost international and domestic calls on their own smartphones. They can make outbound cost-efficient international calls over the property’s existing IP-based or legacy non-IP based PBX systems, reducing international roaming charges on their personal devices.

“…In January, Columbus officials closed a Red Carpet Inn near the I-71/Rt. 161 interchange on the North Side. A homicide took place there in 2012, and there were complaints of shootings, prostitution and drug dealing. Police made at least 358 runs there in 2013.

In June 2013, the city closed the nearby Columbus Inn & Suites. A judge agreed with the move and ordered that the motel remain closed until January 2015. Officials said the motel was a center of drugs and prostitution and was overrun by bedbugs, roaches and mold…”

Columbus officials are studying how a city in southern California is reducing drug deals and prostitution by regulating crime-ridden and dilapidated hotels.

In Ohio, the state fire marshal’s office regulates these businesses.

But the city of Chula Vista, Calif., has an ordinance that allows officials to deny annual hotel and motel permits if they deem that there are too many police runs or drug- and prostitution-related arrests.

Columbus officials now have to obtain a temporary restraining order to shut down a hotel and then go back to court to keep it closed any longer.